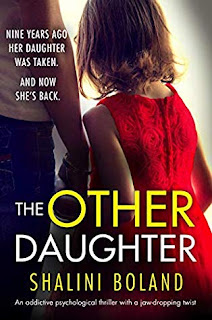 
Nine years ago her daughter was taken. And now she’s back.

Two-and-a-half-year-old Holly is playing happily in a pink plastic playhouse, while her mother Rachel sips coffee and chats with a friend nearby. It should be an ordinary day for all of them. But, in the blink of an eye, it turns into every family’s worst nightmare.

Holly is taken by a stranger and never found.

Nine years later, Rachel is living a quiet life in Dorset. She’s tried to keep things together since the traumatic day when she lost her eldest daughter. She has a new family, a loving partner and her secrets are locked away in her painful past.

Until one afternoon when Rachel meets a new school parent Kate and her teenage daughter Bella. Rachel’s world is instantly turned upside down – she’s seen Bella before. She’d recognise that face anywhere – it’s her missing child.

And she will stop at nothing to get her back…

The Other Daughter by Shalini Boland
First Gripping Paragraph:

This is exactly why I obsessively read everything by this author. She captures my interest right from the start and keeps it until the very end. I read this book in a little over 4 hours which is a record for me but it’s a dreary rainy Sunday and it set the mood perfectly for this psychological thriller.

Rachel experiences the worst nightmare a mother can face; her 2 and half year-old daughter Holly is taken right from under her nose while Rachel is chatting with a friend. There’s no mystery on who exactly takes her because Ms. Boland clues us in right from the start that it’s Catriona. It’s what happens to Holly after that’s the real mystery.
Going from Then to Now, we find Rachel 7 years later with a new family and attempting to overcome the loss of Holly. Rachel meets Kate, a new parent in the area who has a daughter, Bella, that Rachel is sure is her Holly. Rachel will stop at nothing to get her daughter back despite who she hurts and how insanely she behaves.
The Other Daughter is written in chapters of Now and Then with Rachel narrating Now and Catriona narrating Then; this brought a unique view because it gives a little perspective on each character’s frame of mind at the time and somewhat rationales certain actions. Somewhat. This is truly a psychological thriller in the truest sense and there is a turning of the plot that seriously caught me by surprise. Shocked would be a better descriptive. Yes, shocked is how I’m feeling right now and I love when a book has the ability to do this!

The characters are intense and deeply flawed, I know I say this a lot but a flawed character, especially a deeply flawed one, is my favorite because the imperfect are so much more interesting to read. The plot, as I’ve said, is twisty and intriguing and made this book difficult to put down.

I think this is a must read for any fan of psychological thrillers, Shalini Boland, or, literally for anyone who enjoys a riveting book!

A big thank you to NetGalley, Bookouture, and Shalini Boland for letting me read and review this title.

Posted by Kristi The Book Faery at Wednesday, October 16, 2019