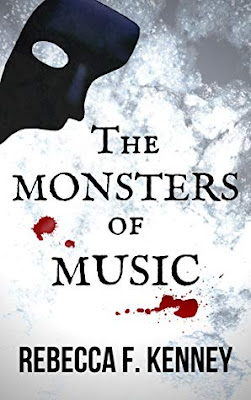 
A darkly romantic gender-swapped modern retelling of The Phantom of the Opera, with a scarred Muse girl, a rock-star boy, and a singing competition. For fans of The Wicked Deep (Ernshaw), Wintersong (S. Jae-Jones), American Idol, or The Voice.

Mel must share her creative magic or be driven mad by it. But finding her first protégé isn't as easy for her as it is for most Lianhan Sídhe (muses of Celtic myth). Though the women of her race are naturally beautiful, she carries horrifying scars across one side of her face, inflicted by her mother's obsessive boyfriend. And Mel isn't only interested in pouring her creative energy into a man; she wants to use her musical genius herself, too. But the laws of the Lianhan Sídhe, and her own savage appearance, stand in the way of her ever singing onstage.

To relieve the painful pressure of her magic, Mel latches onto Kiyoji, a boy with a beautiful voice, and coaches him through a televised singing competition. But neither of them are prepared for the power of their connection, or for the new kind of magic that happens when the two of them sing together.

The Monsters of Music by Rebecca Kenney is a modern retelling of The Phantom of the Opera only in this version, The Phantom (Erik) is Mel, a muse of the Lianhan Sidhe who needs to share her magic or she’ll become insane and in Christine’s role is Kiyoji – Kiyo for short - and like Christine, he is hugely talented. Mel is no slouch in musical talent but because the right side of her face is badly scarred, she shuns any attention, not to mention, it’s strictly forbidden by the Lianhan Sidhe. So, Mel must pour her magical energy into securing Kiyo as her protégé’. What ensues is a romantic and mythical tale that is rich in detail and character.

This is such a cleverly written book; each chapter is labeled with phenomenal songs and the characters are well-developed, and dynamic. Mel isn’t always likable which made me like her more. A flawed protagonist is the most interesting to read. Kiyo is a surprise and their relationship is a gem that I enjoyed watching develop. As a fan of all things Fae, I loved the exploration into the Lianhan Sidhe and the combining of Celtic mythology with a classic. Although there are similarities to The Phantom of the Opera, Ms. Kenney made this one her own and for any fan, this will be an entertaining and fun re-telling of the classic.

A big thank you to Rebecca Kenney for sending me a copy of this title for an honest review!

Posted by Kristi The Book Faery at Tuesday, October 15, 2019

Email ThisBlogThis!Share to TwitterShare to FacebookShare to Pinterest
Labels: 2019 ARC, Faerie, Rebecca Kenney, The Phantom of the Opera, YA Fantasy