THE ETERNITY CURE by JULIE KAGAWA 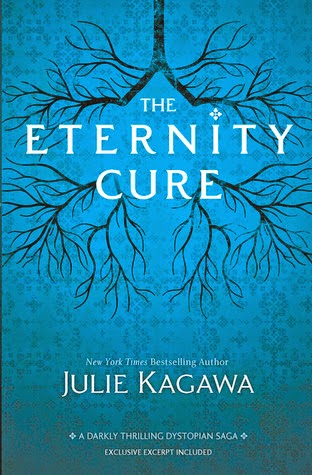 In Allison Sekemoto's world, there is one rule left: Blood calls to blood

She has done the unthinkable: died so that she might continue to live. Cast out of Eden and separated from the boy she dared to love, Allie will follow the call of blood to save her creator, Kanin, from the psychotic vampire Sarren. But when the trail leads to Allie's birthplace in New Covington, what Allie finds there will change the world forever—and possibly end human and vampire existence.

There's a new plague on the rise, a strain of the Red Lung virus that wiped out most of humanity generations ago—and this strain is deadly to humans and vampires alike. The only hope for a cure lies in the secrets Kanin carries, if Allie can get to him in time.

Allison thought that immortality was forever. But now, with eternity itself hanging in the balance, the lines between human and monster will blur even further, and Allie must face another choice she could never have imagined having to make. (From Goodreads)


The Eternity Cure by Julie Kagawa is the second book in the Blood of Eden series. It is 434 pages and published by Harlequin Teen on April 30, 2013.

THE FAERYS VIEW
The Eternity Cure by Julie Kagawa is a marvelous sequel to The Immortal Rules. Ms. Kagawa is one of my all-time favorite authors ever. I adore her Iron Fey series and this series is just as commendable.
Allison Sekemoto is in search of Kanin, leaving Zeke, the boy she loves, behind in Eden. This is the crux of the story but it is so much deeper than this. Allie struggles to maintain her humanity and at times, I struggled with her but Allie is strong and doesn’t easily bend to her desires. She has a bond with Kanin and in her dreams she feels the torture that psycho vamp Sarren is putting her sire through. Allie knows that as time goes by, Kanin either won’t live through what Sarren is putting him through or he’ll go insane from the thirst. There are larger fears that assault Allie on her quest, a new strain of Red Lung – one that kills vampires as well as humans. This is as far as I’m going to go with the storyline, it’s on the jacket cover and also the summary. You need to read it to find out more!
Wow! What a book! I am so in love with the characters! Allie is a kick ass heroine but add in Jackal – whose snark and running commentary is, at times, absolutely hilarious – and you have one heck of a cast! Sarren is truly evil, it permeates out of his character and sends chills up your spine. Seriously, with such well-developed characters that are so beautiful together, this novel can only pull you in deeper because you care about them so deeply. With every page I turned, I became more and more invested in what would happen next.
The beauty of Ms. Kagawa’s writing is that it is complex without being confusing. I have felt this in everything I’ve read that she has penned. I am pulled into the story, into every aspect whether it be bone-chilling thrills, the sweetest romance or the most magical fantasy. This is what makes me pick up everything she writes and also, to eagerly anticipate what she’ll write next!
I so highly recommend The Eternity Cure by Julie Kagawa!
﻿
Posted by Kristi The Book Faery at Saturday, September 27, 2014