THE IMMORTAL RULES [Blood of Eden Book #1] by JULIE KAGAWA

The Immortal Rules [Blood of Eden Book #1] by Julie Kagawa is published by HarperTeen and will be released on April 24th of 2012 in 504 spellbinding pages! 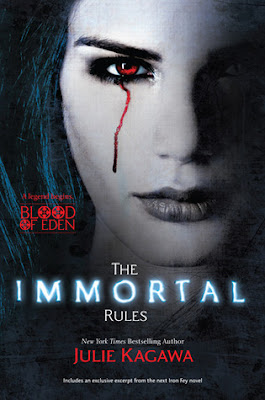 In a future world, Vampires reign. Humans are blood cattle. And one girl will search for the key to save humanity. Allison Sekemoto survives in the Fringe, the outermost circle of a vampire city. By day, she and her crew scavenge for food. By night, any one of them could be eaten. Some days, all that drives Allie is her hatred of them. The vampires who keep humans as blood cattle. Until the night Allie herself is attacked—and given the ultimate choice. Die… or become one of the monsters. Faced with her own mortality, Allie becomes what she despises most. To survive, she must learn the rules of being immortal, including the most important: go long enough without human blood, and you will go mad. Then Allie is forced to flee into the unknown, outside her city walls. There she joins a ragged band of humans who are seeking a legend—a possible cure to the disease that killed off most of humankind and created the rabids, the mindless creatures who threaten humans and vampires alike. But it isn't easy to pass for human. Especially not around Zeke, who might see past the monster inside her. And Allie soon must decide what—and who—is worth dying for.

THE FAERYS VIEW [Pre-review excitement that I had to include!]

Julie has once again out done herself with a fascinating and chilling tale of a dystopian world ruled by vampires and the humans' who both depend on them and fear them greatly.


Allie's journey throughout The Immortal Rules is fraught with danger, pre-virus intrigue, truly creeptastic moments and even love.


That's all for now, a more thorough review closer to publish date! Put this one on your calender or Pre-order now!


The Immortal Rules by Julie Kagawa is nothing short of how spectacular I thought it would be. The anticipation that had built up knowing that Julie was going to the fang side was well worth it. When I got the ARC in my greedy little hands, I was tearing into it before the envelop hit the garbage can. Yes, I did stop to admire the cover but what I really wanted to get to was inside that gorgeous cover!


The true gem of Thea Immortal Rules is Julies titillating plot: just when you think you’ve seen every possible vampire scenario, Julie goes and changes the genre much like she did for the Fae world. Told as only Julie can do, the action is non-stop and the creepy dystopian world she paints for the reader is all too realistic-which I found deliciously frightening!


Imagine yourself living in the worse ghetto possible with no lawful system in place, no food, no shelter, nothing… it’s a survivors dystopia but then add in cannibals, gangs that rape you and worse but that still isn’t the worse! Add in Vamps that often roam the streets at dark plucking juicy morsels out of the best hiding spots they can find. This is the world that Allie lives in. Allie lives in a world that is ruled by the vampires, sure she could get more food if she’d let the vamps stamp her like the rest of the herd but she refuses to let them take any more from her then they already have. She has her ‘gang’ that sort of look out for each other but in this world, people don’t live long. Allie is hard as nails, kick-ass and take names later and extremely world wise. Allie does have a softer side and she takes pity on the weaker kid in their group, making sure he has enough to eat but at the same time she resents him for not pulling his weight.


On a trip out of the ‘safe area’ looking for food, Allie becomes what she detests the most but she’s give a choice: die or live as a vamp. She chooses to live as a vamp but she has a mentor who sets her out on her own when he’s taught her all he can. It’s then that Allie runs into a traveling human pack and falls in love with Zeke and Zeke in love with her. Zeke having no idea that that Allie is, indeed, the thing that they fear the most-the thing they HATE, the thing they
The way Julie portrayed this beautiful love affair was perfect; it was earned, it was earnest and it was the love we all wish for. I hate to bring in The Iron Fey because The Immortal Rules deserves its own review but I saw this with her characters in that series. No insta-love but a love that is based on getting to know that person. Of course there’s an initial physical attraction but that’s so for all romance, it’s the deep romance that Julie does so beautifully.


World building-WOW! I was right there the whole time; The Immortal Rules is one of those books where I found myself in another world-literally. I could imagine every scene as if I were there-sights, smells and audio. It’s a rare gift when an author can drag me in that deep into a book that when the phone rings, I don’t hear it until it’s on its third ring or I don’t use the bathroom until I have to pretzel dance all the way to the bathroom! I’d say maybe 15, maybe 20 novels out of a couple of thousand that I’ve read have done that to me, two (2) of them by Julie herself!


There is so much more I’d love to say but I refuse to ruin this book for anybody. All I can do is sing the praises of this magnificent book and its magnificent author and give the best advice to you all: READ THE IMMORTAL RULES!


THE FAERY SAYS THAT THE IMMORTAL RULES BY JULIE KAGAWA ROCKED MY WINGS!


Thank you to Netgalley and HarlequinTeen for allowing me to view this galley in exchange for my honest opinion.