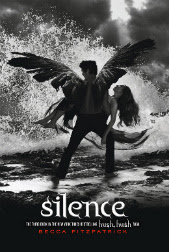 The noise between Patch and Nora is gone. They've overcome the secrets riddled in Patch's dark past...bridged two irreconcilable worlds...faced heart-wrenching tests of betrayal, loyalty and trust...and all for a love that will transcend the boundary between heaven and earth. Armed with nothing but their absolute faith in one another, Patch and Nora enter a desperate fight to stop a villain who holds the power to shatter everything they've worked for—and their love—forever.

Cover Lover Happiness! Such a Dark, Eerie and yet Oddly Romantic Cover! One that depicts what I think is going to be an amazing finale to the Hush, Hush Saga.

Patch and Nora's romance hasn't been an easy one but at the end of Crescendo, it left most of us wondering if maybe Patch could redeem his past bad-boy behavior and by the looks of this cover, it just might happen.
We shall see!

I read the past two, Hush, Hush and Crescendo and there were times I wanted to kick Nora in the butt and lock Vy in a locker for good-muzzle and all-but the ending of Crescendo once again got me very interested in the saga and my sympathies with Vy and just maybe made me think Patch wasn' such a bad dude after all-Don't get me wrong, he's a badass, no doubt but his treatment of Nora was horrid yet she kept going back for more and putting herself in the most dangerous of situations but if she didn't would the book have been any good? Do I read books so that I can read about 'everyday' life? Nah, not really! So, with that being said:

This is one book that I will most eagerly anticipate and yes, those faery wings are aflutter with faery dust flying everywhere :o]
Posted by Kristi The Book Faery at Thursday, May 05, 2011