HEXBOUND: A novel of the dark elite by Chloe Neill 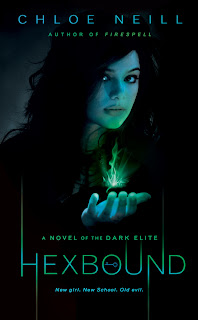 First Impressions:
Hexbound was everything I thought it would be and more:  mysterious, magical and mystical. The young Enclave 3 finds themselves battling even more big baddies and I liked to see that they interacted with some more of their kind. The actions starts from the beginning and keeps going to the end.
My Review:
Young Lily Parker was chosen to go to St. Sophia’s by her parents for a reason and she needs to know the reason. She is one of the few who has the power of ‘firespell’ and the rest of the Enclave 3 has varying magical talents that help them fight the bad guys: The Dark Elite AKA The Reapers.
I can’t say too much in this review without giving spoilers. I will say that a certain Sebastian who just happens to be part of The Dark Elite and the one who opened up Lily’s power when he zapped her in the previous book, aptly named “Firespell: A Novel of the Dark Elite is cozying up to Lily and wants to be ‘friendly’. Scout is as true blue of a friend as always and of course Jason, Lily’s love interest is still ‘sniffing’ around.
My Summary:
This is a fabulous book and one that I’m glad I didn’t miss. It’s a fairly short read but well worth the money. There’s another follow-up in the making and I’m sure it won’t disappoint.
For now, get your fill of Enclave 3 and The Dark Elite, I guarantee, you won’t regret it!
Posted by Kristi The Book Faery at Thursday, February 03, 2011