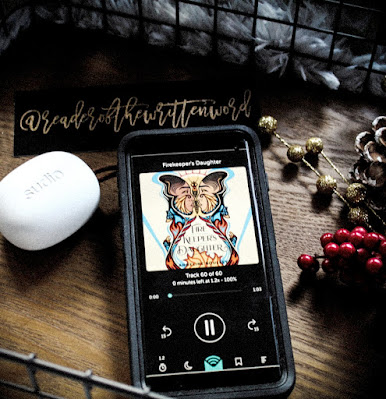 Firekeeper’s Daughter by Angeline Boulley is such a powerful and impactful book. It’s centered on Daunis Fontaine, an 18-year-old biracial girl living in two worlds. On one side, she is Ojibwe, although unenrolled and revels in the traditions of her native culture and on the other she is French Canadian, a white girl with privileges that many within her Anishinaabe family and tribe don’t have.When a murder fueled by a new type of methamphetamine happens within Daunis’s inner circle, she realizes that the drug problem within her community runs deeper than she could’ve imagined and much closer to home. Agreeing to assist the FBI, Daunis ventures into the dark nature of the drug trade.There’s a lot to love about this book; first, the depth of cultural history within the Anishinaabe tribe. It was a joy to listen to and learn so much about the Ojibwe community. Second, the strength of women supporting women; the author writes about the beauty of female friendship and relationships, mother to daughter, aunt to niece, friend to friend. There’s also the heart wrenching issue of racism and violence against the indigenous community, past and present.The story is well-plotted and beautifully scripted, there is a mystery at heart and the author skillfully takes you through Daunis’s inner struggles with her need to protect her community and just what she’s willing to sacrifice. The narrator Isabella Star LaBlanc was phenomenal and I enjoyed her smooth narrative, her ability to seamlessly switch characters and her lilting tone when speaking the indigenous language.Firekeeper’s Daughter takes place in my state of Michigan and it made this already fantastic story that much better when the author took me to some beloved places in the Upper Peninsula of Michigan.Five stars for this cross-genre gem and my thanks to Libro FM, Macmillan Audio and Henry Holt & Co. for gifting me an ALC.

Posted by Kristi The Book Faery at Sunday, February 14, 2021