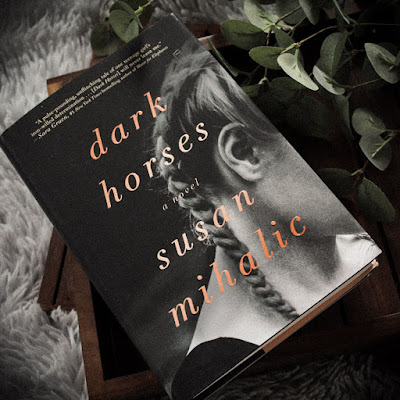 Fifteen-year-old equestrian prodigy Roan Montgomery has only ever known two worlds: inside the riding arena, and outside of it. Both, for as long as she can remember, have been ruled by her father, who demands strict obedience in all areas of her life. The warped power dynamic of coach and rider extends far beyond the stables, and Roan's relationship with her father has long been inappropriate. She has been able to compartmentalize that dark aspect of her life, ruthlessly focusing on her ambitions as a rider heading for the Olympics, just as her father had done. However, her developing relationship with Will Howard, a boy her own age, broadens the scope of her vision.

Dark Horses is one of the most soul-crushing books I’ve read and also a book that had me feeling so uncomfortable and disgusted, helpless and I admit, vindictive and vengeful. It’s unapologetically raw and emotional and I’m having a hard time reviewing it because how do you put into words the horrific physical, sexual and emotional abuse of a child?

Dark Horses is a dark and painful look at what happens behind closed doors in a dysfunctional home riddled with abuse and control. The manipulation and fear tactics used by the abuser and the effect on the victim. It is a vivid and graphic portrayal and at first, I wasn’t sure if this was necessary until I thought about it; every emotion, every feeling, every injurious occurrence that Roan has, both during the abuse and after, speaks volumes on the power the abuser has over the victim. I won’t go into details but I felt that this is the authors intent; to make the reader uncomfortable and repulsed because, after all, this is a taboo subject that is often swept under the carpet and shames the victim more than the abuser. And in true abuser style, this is a tactic used to control.

There are a lot of TW including incest, abuse, animal cruelty and death, sexual assault, substance abuse.

#QOTD: Do you read books with difficult topics?

Be safe and be well, my friends

Posted by Kristi The Book Faery at Tuesday, February 16, 2021