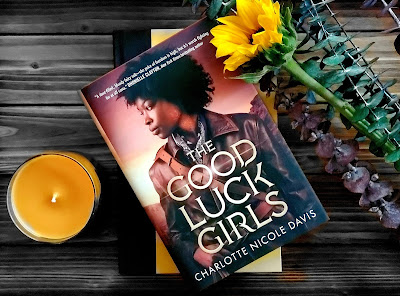 Westworld meets The Handmaid’s Tale in this stunning fantasy adventure from debut author Charlotte Nicole Davis.
Aster, the protectorViolet, the favoriteTansy, the medicMallow, the fighterClementine, the catalystTHE GOOD LUCK GIRLSThe country of Arketta calls them Good Luck Girls―they know their luck is anything but.Sold to a “welcome house” as children and branded with cursed markings.Trapped in a life they would never have chosen.When Clementine accidentally kills a man, the girls risk a dangerous escape and harrowing journey to find freedom, justice, and revenge in a country that wants them to have none of those things. Pursued by Arketta’s most vicious and powerful forces, both human and inhuman, their only hope lies in a bedtime story passed from one Good Luck Girl to another, a story that only the youngest or most desperate would ever believe.It’s going to take more than luck for them all to survive.
TITLE: The Good Luck Girls
AUTHOR: Charlotte Nicole Davis
PUBLISHER: Tor Teen
PUBLICATION DATE: October 1, 2019
FORMAT: Print
GENRE: Young Adult Dystopian
PAGES: 352
MY REVIEW
⭐⭐⭐⭐⭐

The Good Luck Girls (TGLG) is a distinctive story set in a uniquely built world (think dystopian wild west) that I literally devoured in a day! The story centers around five girls, Good Luck Girls, who have been sold by their families to a Welcome House which is anything but welcoming to the girls that come there. As children they arrive as Daybreak girls, they are given a Favor – a magical type tattoo that grows as they age and then forced into manual labor until the age of 16. Once they reach their 16th birthday and their favor has fully bloomed, they will have their Lucky Night and are sold at auction to the highest bidder for the night. Then they are officially a Sundown girl, entertaining the Brags (insert Johns here) every night until they age out and then are usually cast out in to the street to starve. This brings us to our five girls:

“Sisters by chance. Outlaws by choice. Aster: The Protector, Violet: The Favorite, Tansy: The Medic, Mallow: The Fighter, & Clementine: The Catalyst.”

Clementine and Aster are sisters by blood. Aster has been a Sundown girl for over a year and when Clementine’s Lucky Night arrives something happens that sets all five girls on a harrowing trip across the Scab, the harsh wilderness of fictional Arketta where the story is set. With the Welcome House’s henchman, the Reckoners on their trail, they have to keep one step ahead and when they meet Ezekiel, Zee, a Rangeman with his own secrets they form a group of unlikely allies. It’s not just the Reckoners they have to worry about, although these soulless men are paid to keep each girl in line by invading their mind with their deepest terrors, there are also Vengeants, ruthless spirits drawn to suffering that will rip a person apart with their claws. It’s a dangerous place and they’ll need their wits about them to survive the trip to find the mysterious Lady Ghost, rumored to be able to remove the magical favors that mark the girls.

The world building in TGLG is phenomenal, truly a different world yet similar to ours in many ways. There is oppression and poverty, and times when I felt a sense of overwhelming despair & hopelessness for their situation and yet, the powerful force of sisterhood and courage between the group prevailed in these times, giving me a sense of hope. The characters are beautifully developed and I became emotionally invested in them. The majority of the story is told by Aster and she is a powerful character but flawed with anger by her harsh life.

“But anger … anger gets things done. Sometimes, at least. You just have to make sure you’re using it, and never the other way around.”

I cannot wait for the next book!