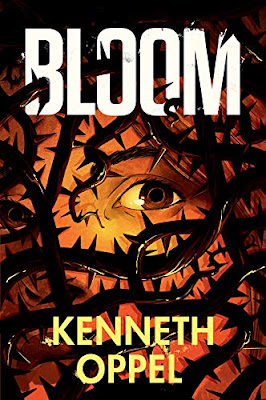 It was just rain.

But after the downpour, odd black plants begin to shoot up.

They take over fields and twine around houses. They bloom and throw off toxic pollen—and feed.

Strangely, three Salt Spring Island teens seem immune. Anaya, Petra and Seth. What’s their connection? What’s their secret? A week ago, they wouldn’t have thought they had one.

But they’d better figure it out fast—the invasion has already begun.


Bloom by Kenneth Oppel
My rating: 4 of 5 stars

“So, this must be the Miracle Three”
-Colonel Pearson, Bloom

I thoroughly enjoyed Bloom – The Overthrow #1 by Kenneth Oppel, it’s a solid sci-fi book with more than a touch of horror; it’s suspenseful, thrilling, and quite frankly, a bit terrifying in its potential. Strange and extremely sturdy and indestructible black plants begin growing at an unbelievably rapid rate after a heavy rain that covers the entire earth. People begin to have strong allergic reactions to the strange new pollen in the air, everyone except three teenagers on Salt Spring Island. Anaya, Petra, and Seth each have something a bit different about them aside from their immunity to the toxic pollen and other nasties that the invasive plants bring to earth, it is these differences that will bring them together but will also set them apart from the rest of the world’s population.

The story-line in Bloom is fast-paced and set over a period of three weeks, two weeks earlier and one week after and is told in multiple narratives focusing on the three teenagers. Bloom is not lacking in action and suspense and there were times I felt anxiety at what was happening: Soccer field and man-eating acid spewing plants is as much as I will say about this because I really don’t want to spoil the suspense for anyone but seriously, I could not help but think of Audrey in Little House of Horrors minus the ‘feed me, Seymour’ humor!

The base science and botany mixed in with fiction made this a compelling read along with the extremely well written characters. Each main character had an interesting back history that helped me get to know them better without boring me. The ending left me wanting more and I am looking forward to the second in this series, I have no doubt it will be just as great as Bloom.

Although Bloom is geared towards younger readers, I think Bloom is a book that anyone with an interest in science fiction or just a great story, will enjoy immensely.

A big thank you to NetGalley, Random House Children, Knopf Books for Young Readers, and Kenneth Oppel for providing this copy of Bloom in exchange for my honest opinion.


View all my reviews
Posted by Kristi The Book Faery at Friday, March 20, 2020