Wicked As You Wish by Rin Chupeco 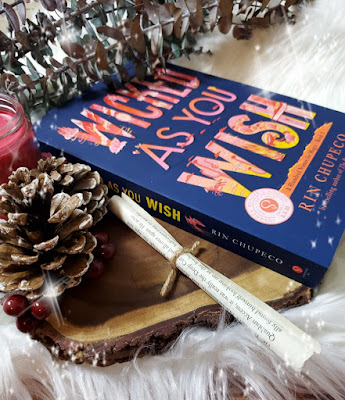 Tala Warnock has little use for magic – as a descendant of Maria Makiling, the legendary Filipina heroine, she negates spells, often by accident. But her family’s old ties to the country of Avalon (frozen, bespelled, and unreachable for almost 12 years) soon finds them guarding its last prince from those who would use his kingdom’s magic for insidious ends.And with the rise of dangerous spelltech in the Royal States of America; the appearance of the firebird, Avalon’s deadliest weapon, at her doorstep; and the re-emergence of the Snow Queen, powerful but long thought dead, who wants nothing more than to take the firebird's magic for her own – Tala’s life is about to get even more complicated….


Wicked As You Wish by Rin Chupeco
My rating: ⭐⭐⭐⭐

Wicked as you Wish by Rin Chupeco is a bridge apart from her past books that I’ve read; it doesn’t carry the same feeling of darkness that The Girl from the Well or The Bone Witch series does but I found it to be just as compelling. Although it took a little time for me to get in to the story, I’m glad I stuck with it.

Prince Alexei of Avalon is new to Arizona in the Royal States of America and is living undercover since the Snow Queen encased his Kingdom in ice. Tala has the ability negate or to break spells and when Avalon’s guardian, the firebird arrives, Tala, Alex, and others are sent to Avalon to fight the evil Snow Queen and her icy minions.

The merging of a variety of folk-lore and fairy-tales hit some of my all-time favorites and incorporated some new. As with all of her books, the world-building is phenomenal and intricate, vivid and imaginative, all the war from the Royal States of America to Avalon.

Ms. Chupeco has brought the magic in the most unlikely of places and a wonderful cast of characters that I quickly fell in love with. The cast is well-layered, diverse, flawed and I quickly became invested in their stories. If you like high fantasy mixed with folk-lore/fairy-tales and runaway Princes then this is the book for you. I’m looking forward to the next in the series.

A big thank you to Sourcebooks Fire and Rin Chupeco for providing me with Wicked as you Wish in exchange for my honest review.


View all my reviews
Posted by Kristi The Book Faery at Wednesday, February 12, 2020