The New Husband by D.J. Palmer 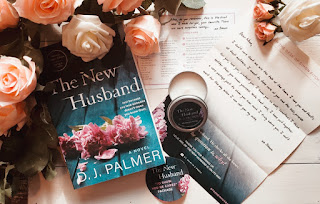 Just because you love someone doesn't mean you know them.Nina Garrity learned that the hard way after discovering that her missing husband, Glen, had been leading a double life with another woman. But Glen's gone--presumably drowned while fishing on his boat--so she can't confront him about the affair or any of his other misdeeds. A year and a half after the accident, Nina considers herself a widow, even though the police never found a body. Following a chance encounter with Simon Fitch, a teacher from her daughter Maggie's middle school, Nina finds love again and has hopes of putting her shattered life back together.Simon, a widower still grieving the suicide of his first wife, has found his dream girl in Nina. His charm and affections help break through to a heart hardened by betrayal. Nina's teenage son, Connor, embraces Simon as the father he wishes his dad could have been, but Maggie sees a far darker side to this new man in their lives. Even Nina's good friends wonder if Simon is supremely devoted--or dangerously possessive.But Nina is committed, not only to her soon-to-be new husband but also to resuming her former career as a social worker. Before she can move forward, however, Nina must first clear her conscience that she's not making another terrible choice in a man. In doing so, she will uncover the shocking truth: the greatest danger to her, and her children, are the lies people tell themselves.

Here’s the thing: I kind of saw what was happening in The New Husband by D.J. Palmer yet I was compelled to keep reading because what unfolded along the pages as I kept reading was so freaking disturbing that I couldn’t look away. The tension and atmosphere made it really difficult to put down.

To begin with, Nina’s husband, Glen, disappears with no trace off a boat while fishing. Betrayals are then revealed, leaving Nina and her two children, Maggie and Connor, torn and hurt while also trying to properly grieve. Enter Simon, a beloved Middle School teacher who has an endless supply of ‘family’ money and is basically just what Nina and Connor need at that very time in their lives. Maggie, though, isn’t quite as easily fooled. She has a feeling about Simon and it isn’t a good one.

Maggie is my favorite character; she is instinctive in her need to protect her family and her awareness of the danger lurking beneath the surface. Nina is also a strong and admirable character; she is naïve at times but in the nature of the story it works well with what’s happened in the past. The secondary characters are as well-developed as the main, Ben, in particular is kind of my hero. The story-line flows quickly and surely through a multitude of twists and turns, thrills and suspense. The subject of domestic violence is explored showing the victims angst and suffering at the hands of her abuser. It’s a subject that I will never tire of seeing because it will always be a story that needs to be told.

"Sometimes we make poor choices on this journey. Instead of sitting in judgement of those choices, let's help each other get back on the right path.
That's what I've learned from the greatest challenge I've ever faced. That's how it changed me."

I highly recommend this to any fan of psychological thrillers, mystery, or suspense.

A big thank you to NetGalley, St. Martin’s Press, and D.J. Palmer for providing The New Husband in exchange for my honest review.

View all my reviews
Posted by Kristi The Book Faery at Monday, January 20, 2020