Golden in Death by J.D. Robb 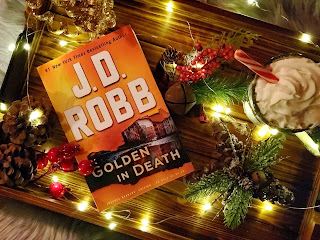 Golden in Death by J.D. Robb

In the latest thriller in the #1 New York Times bestselling series, homicide detective Eve Dallas investigates a murder with a mysterious motive and a terrifying weapon.Pediatrician Kent Abner received the package on a beautiful April morning. Inside was a cheap trinket, a golden egg that could be opened into two halves. When he pried it apart, highly toxic airborne fumes entered his body and killed him.After Eve Dallas calls the hazmat team and undergoes testing to reassure both her and her husband that she hasn't been exposed it's time to look into Dr. Abner's past and relationships. Not every victim Eve encounters is an angel, but it seems that Abner came pretty close though he did ruffle some feathers over the years by taking stands for the weak and defenseless. While the lab tries to identify the deadly toxin, Eve hunts for the sender. But when someone else dies in the same grisly manner, it becomes clear that she's dealing with either a madman or someone who has a hidden and elusive connection to both victims.

Golden in Death by J.D. Robb is the 50th book in the futuristic In Death series featuring bad-ass Lieutenant Eve Dallas and her incredibly unique investigative skills. As with all of Robb’s In Death books, it’s not hard to fall in love with the cast of main characters. They are a bit like family and I love them just as they are; the good, the bad, and a little bit snarky.

Golden in Death begins with Lt. Eve Dallas and Detective Peabody investigating a case in which a toxin filled golden egg is delivered to a well-loved physician and trying to figure out why he was targeted. There are red-herrings and dead ends but the team is dogged and determined to get to the bottom of the mysterious deaths. Of course, tech guru Rourke makes his appearances to offer aid to Eve and Peabody in the case. Eve and Rourke’s personal relationship is just as sweet as ever with Eve seeming to accept that she needs him more than she wants to admit and she is all the better for it.

The side characters are entertaining and the big bad was a surprise. Twists, turns, and a fast-moving plot made Golden in Death an extraordinary read and as with all of Robb’s books, I had a hard time putting it down.

This a fantastic book for any fan of the series, J.D. Robb, or the suspense/mystery/thriller genre!

A big thank you to Macmillan for the gifted copy of GOLDEN IN DEATH by J.D. Robb in exchange for an honest review!


View all my reviews
Posted by Kristi The Book Faery at Friday, December 06, 2019