The Stars We Steal 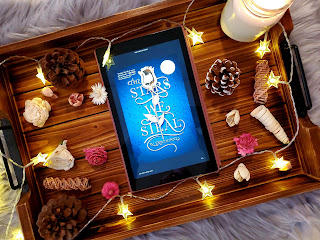 The Stars We Steal by Alexa Donne

Engagement season is in the air. Eighteen-year-old Princess Leonie “Leo” Kolburg, heir to a faded European spaceship, only has one thing on her mind: which lucky bachelor can save her family from financial ruin?But when Leo’s childhood friend and first love Elliot returns as the captain of a successful whiskey ship, everything changes. Elliot was the one that got away, the boy Leo’s family deemed to be unsuitable for marriage. Now, he’s the biggest catch of the season and he seems determined to make Leo’s life miserable. But old habits die hard, and as Leo navigates the glittering balls of the Valg Season, she finds herself failing for her first love in a game of love, lies, and past regrets.

The Stars We Steal is a love story set in the future and is based loosely on Jane Austin’s Persuasion. Instead of country estates and mansions, though, the wooing, heartache, and revenge takes place on space ships.

Because Earth is uninhabitable due to an environmental disaster, each continent has their own ship. Princess Leo is heir to a bankrupt and somewhat decrepit ship, the Scandinavian, and the burden of marrying for wealth is falling on her. Enter her ex-fiancé, Elliot who has a bone to pick with Leo and isn’t afraid to take his revenge on her in some pretty despicable ways.

Alexa Donne has taken the well-known story of Persuasion and given it a unique futuristic twist that is an enjoyable read for any fan of romance with a heavy dose of sci-fi.
3.5 ⭐⭐⭐'s rounded up to 4

A big thank you to NetGalley and Houghton Mifflin Harcourt Childrens Book Group for providing this book for my honest review.

View all my reviews
Posted by Kristi The Book Faery at Wednesday, November 20, 2019