THE 100 SOCIETY by CARLA SPRADBERY 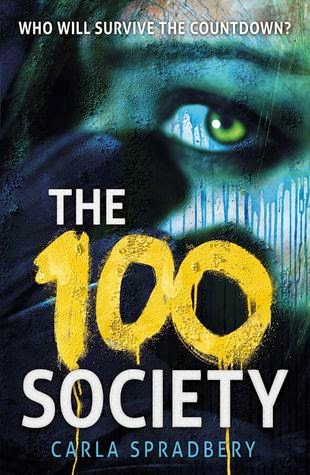 For sixth-form student Grace Becker, The 100 Society is more than just a game; it's an obsession. Having convinced her five friends at Clifton Academy to see it through to the end, Grace will stop at nothing to carry out the rules of the game: tagging 100 locations around the city. With each step closer to the 100-mark they get, the higher the stakes become. But when the group catches the attention of a menacing stalker - the Reaper - he seems intent on exposing their illegal game, tormenting Grace with anonymous threats and branding their dormitory doors with his ominous tag.

As the once tight-knit group slowly unravels, torn apart by doubt and the death of a student, they no longer know who to trust.

With time running out, Grace must unmask the Reaper before he destroys everything she cares about for ever... (From Goodreads)

The 100 Society is written by Carla Spradbery and is published by Hodder Childrens Books. It is 317 pages and published on September 4, 2014.


THE FAERYS VIEW
Okay, so I’ve been on somewhat of a thriller/horror kick lately. The 100 Society by Carla Spradbery had the potential to be a great thriller but to me, it was a bit sophomoric. I really, really wanted to like this book … I really did but I have a big problem with characters that just behave stupidly. Especially when the author initially portrays them as smart characters and I have to watch their intelligence level take a nose dive throughout the book.
The 100 Society is a group that begins at Clifton Academy, the essence is that they tag a series of locations – 100 locations to be specific - with their unique graffiti mark. This will gain them unrecognized fame and glory. It will also get them expelled from the academy if they’re caught. This is one of the biggest fears of the main character, Grace. Grace has a serious inferiority complex caused by her highly successful older brother, Jack and lack of attention from her surgeon father. So, it’s sort of a tug-a-war for me in the arena of ‘why in the heck is she doing this’? Why risk expulsion if your biggest fear is disapproval from your father? But … one character, Ed, makes a comment in the book that if they manage to tag all 100 locations, it will all but guarantee them a spot in the finest art schools. But that leads me to the question: If they can’t tell anyone, ever, how will the finest art schools know they did it? So, you see my dilemma here.
What started out as such a promising read quickly became a bore. Grace and her friends blatantly ignore billboard size signs that read, “Yep, I took out your buddy and you’re next!” and continue on blindly, all for possible street cred? I mean nobody’s going to know they did this and if anyone finds out, the best possible outcome is expulsion from school and parental disapproval? Let’s face it, if you get expelled from school, chances are that the ‘best art schools’ aren’t going to accept you anyways. I guess if there was more to gain from belonging to The 100 Society, I could get behind it. Give me a better reason for this, please! Something more to gain ...  anything! This was my biggest problem with the book, there was no feasible reason behind the premise. I understand that an unknown artist did this years ago and said unknown artist who goes only by 'A' has made millions off his artwork but it still doesn't tie in to the story and here's why: 'A' made no money of his graffiti tag, 'A' is a fictitious character within a fictitious work, therefore lacking any real credential that he is even a real artist within the book and lastly, I think that this tidbit about 'A' was thrown in there just to justify and give some vague reason for the 'New' 100 Society to even exist because, Lord knows, I can't come up with a valid reason.
The characters were bland and boring, I held out a lot of hope for Trick, I thought he would be the shining star out of all of them. The handsome yet tattooed rebel who comes off cool and detached, but nope, he became as two dimensional as the rest of them. Grace, the main character, felt flat and forced, selfish and self-absorbed. I never felt the closeness that this group was supposed to have, in fact, their interactions felt like a group of strangers. I have more intimate conversations in the Wal-Mart check-out line.
I will give credit to some mildly thrilling moments but that’s about the best I can do. I was disappointed in this book. Not something I would recommend.
This ARC was provided by Netgalley and the publisher for an honest review.
Posted by Kristi The Book Faery at Thursday, October 02, 2014