MY SOUL TO KEEP by RACHEL VINCENT 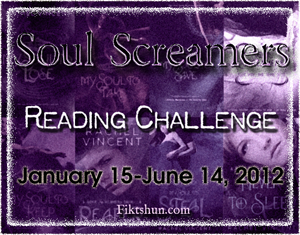 Rachel from [FIKT]Shun has created a very cool reading challenge for the lovers of The Soul Screamer Series by Rachel Vincent . I'm doing the third in the series, My Soul to Keep, first because in my humble opinion it's the book that changed the whole series!


On with my review!


When I finished My Soul to Keep, the third installment in the Soul Screamers series, I realized that I had hardly moved for the last half of the book! I also realized that Rachel not only created a brilliant piece of dark fiction but she also touched on many real issues that teens/adult’s face in today’s world.


Kaylee has been through more than her fair share of horror and heinous events. Born a Bean Sidhe, motherless and with an absentee father she’s had to survive being institutionalized, taking trips into the Netherworld and fighting off evil relatives bartering for her soul—among other things. But, she has Nash, her gorgeous and compassionate boyfriend to even things out and he should be compassionate—he’s a Bean Sidhe, too, and he’s always been there for her.They are perfect together, Yin and Ylang until this books events open up.


My Soul to Keep starts with Kaylee and Nash at a party where a classmate is using Demon’s Breath. It’s deadly and highly addictive and of course, it's from the Netherworld; Kaylee is going to find out just how this dangerous substance ended up in the hands of kids at her school. What Kaylee finds out is shocking and puts her life and those she loves in grave danger.


I felt every emotion that Kaylee felt throughout the book. Betrayal, shock, hurt, fear… All those emotions are so cleverly written into the story along with a strong sense of being there. The ending was fierce although I expected nothing less from Kaylee; she’s a strong independent young woman and has really grown into her character. Touching on issues such as drug abuse and all that goes with it could really hit home for a lot of readers. Rachel Vincent cleverly puts all the signs of abuse in the text and although this is fiction, it sends a strong positive message out. Sometimes the people you love the most can be the ones that hurt you the most, can deceive you the most and can make the biggest excuses. Kaylee finds this out the hard way but again, despite the devastation and unbelievable hurt, Kaylee has limits and she stands by them. This is what makes her a heroinne worth looking up to. Strength, morality, compassion and a strong sense of self.


The next in the series, My Soul to Steal is guaranteed to be another rapid page turner.


THE FAERY SAYS THAT MY SOUL TO KEEP BY RACHEL VINCENT ROCKED MY WINGS AND THEN SOME!