Bewitching by Alex Flinn was published by Harperteen on February 15, 2012. It is 336 pages in print and available in e-format. Bewitching is available at Amazon and other book retailers. 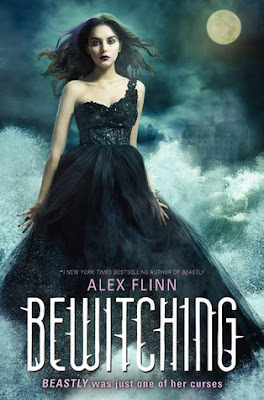 Once, I put a curse on a beastly and arrogant high school boy. That one turned out all right. Others didn’t.

I go to a new school now—one where no one knows that I should have graduated long ago. I’m not still here because I’m stupid; I just don’t age.

You see, I’m immortal. And I pretty much know everything after hundreds of years—except for when to take my powers and butt out.

I want to help, but things just go awry in ways I could never predict. Like when I tried to free some children from a gingerbread house and ended up being hanged. After I came back from the dead (immortal, remember?), I tried to play matchmaker for a French prince and ended up banished from France forever. And that little mermaid I found in the Titanic lifeboat? I don’t even want to think about it.

Now a girl named Emma needs me. I probably shouldn’t get involved, but her gorgeous stepsister is conniving to the core. I think I have just the thing to fix that girl—and it isn’t an enchanted pumpkin. Although you never know what will happen when I start . . . bewitching.

"It is the story of Kendra and her first 300 or so years of life. In Bewitching, Kendra ponders whether to help out a modern day plain-looking stepsister, while also reflecting on her experiences in the 1666 British plague, the court of Louis XV, and on the Titanic." (Source: author's Facebook intro)

Bewitching by Alex Flinn was FAN-FAERY-TASTIC! Ms. Flinn out did herself in this spectacular tale of my favorite witch. Ms. Flinn has written many successful remakes of classic faery tales-each and every one of them a joy to read.

Bewitching is Kendra Hilferty’s tale. You may remember Kendra best as the witch in Beastly when she cast the spell upon a boy making him as ugly on the outside as he was on the inside. Kendra is centuries old and has lived an amazing life, most of it trying to help others but as she explains in Bewitching, sometime even the best intentions can go awry.

In Bewitching, Kendra decides to help a teenage girl deal with her step-sister that is slowly taking over her life. I’m not going to go into detail on this but interspersed between the present, Kendra also tells us about her past. Giving a glimpse into her somewhat lonely life endears Kendra to the reader. I felt as if I knew her and understood the reasons behind everything she did.

Ms. Flinn has the most captivating voice in storytelling and I can’t help but be drawn into everything she writes. Kendra’s story is told within Emma’s story so as I read along I learned both about Kendra, the misunderstood witch who got a bad rap in Beastly but is so fully understood and loved in Bewitching and then there’s Emma, the teenager that Kendra is wondering if she should help or not. Emma's story is a modern day re-telling of Cinderella but it’s not (~Wink~) you’ll have to read to figure that one out!

Ms. Flinn’s perfectly poetic plot is full of action, suspense, mystery and of course, magic! Kendra manages to pull off some hilarious hijink’s that had me chuckling-nothing like seeing the ‘mean girl’ get hers! On top of all that, there is Kendra’s glorious history from Louis XV to the Titanic, each one a well known faery tale.

The entire book pulls together perfectly and I must say that Alex Flinn is a brilliant author and not one book that she pens will ever get by me! She is one of my favorite authors and will remain so, I feel so fortunate to have been able to read her books and even more fortunate to have been able to read the ARC of Bewitching; a masterpiece in storytelling and One-Sit-Read for this reviewer!

THE FAERY SAYS THAT BEWITCHING BY ALEX FLINN ROCKED MY WINGS!!!

Thank you to ATWT and the publisher for allowing me to view this ARC in exchange for my honest opinion.
Posted by Kristi The Book Faery at Monday, February 20, 2012