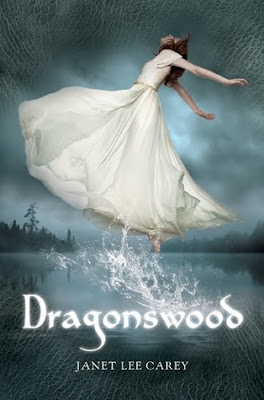 Wilde Island is in an uproar after the recent death of its king. The uneasy pact between dragons, fairies, and humans is fraying, and a bloodthirsty witch hunter with a hidden agenda whips villages into frenzies with wild accusations. Tess, a blacksmith’s daughter from a tiny hamlet near the mysterious Dragonswood, finds herself caught in the crosshairs of fate when she is accused of witchery and has to flee for her life along with her two best friends.


Not even Tess’s power to see the future can help the girls as they set off on their desperate journey, but she keeps having visions of a man wielding a sword. And when she finally meets him, Tess has no idea how to handle the magnetic attraction she feels for him, or the elusive call she hears from the heart of the Dragonswood.


In this epic romance, an ancient prophecy comes true in a way neither dragon, fairy, nor human would have predicted

Dragonswood by Janet Lee Carey was an absolute delight to read. I spent the entire day reading it and then late into the night until I sighed in contentment at the last page. This doesn’t mean that I don’t foresee a sequel in the future, though! I absolutely Loved this novel!

Tess lives with her mother and blacksmith father in the small village of Harrowton on Wilde Island, the year is 1192. Tess’s life is one of physical & emotional abuse by her drunken father. The only time she can get away from the oppressiveness of her home is to steal into the nearby Dragonswood which is illegal. Nobody is allowed into Dragonswood which is a sanctuary for the Dragons and the fey. The late Queen Rosalind deemed it a sanctuary and it is surrounded by a wall and patrolled by Woodward’s who are favored and live in Dragonswood itself. The surrounding villages are in chaos and hungry for the meat that Dragonswood holds but not because of their lack of entrance into the woods but because of the evil Lord Sackmore who is in charge of the realm since the King died but has his own nefarious plans to carry out while waiting for Prince Arden to return from the Crusades and come claim the throne. There is a younger prince, Prince Bion, but for him to step up and take control would seem as if he were trying to usurp he’s brothers birthright. It is said that all of Pendragon Castle’s heirs have dragon scales somewhere on their bodies, making them special.
And then there’s the ancient prophecy


In the enchanted Woodland wild,
The Prince shall wed a Fairy child,
Dragon, Human, and Fairy,
Their union will be bound by three.
And when these lovers intertwine,
Three races in one child combine.
Dragon, Fey, and Humankind
Bound in one bloodline

Tess’s mother has had one stillbirth after another and it’s the day after Tess loses her little brother Adam when Lady Adela rides in with all her knights. At first in awe of the woman who rides like a man and runs her own life without a man to tell her what to do, it isn’t long before Lady Adela stirs up the crowd to point out potential witches. Lady Adela had been abducted by witches who hobbled her and put out her eye years back, since then she has been on a vendetta against them. The Queen had the Fey make her a glass eye which is said to have magical powers. When she turns that eye on Tess the story begins.


Forced to flee with her two best friends, Meg-married at 14 years old and mother to 3 year old Alice and Poppy, gorgeous with the power to hold men’s attention. Their journey through Dragonswood is difficult and frightening. Tess has a secret power, she sees visions in fire and when the 3 girls come across the man in the visions she is at first very frightened-he’s a Woodward. Garth the Woodward or Garth Huntsman as he likes to be called is of course gorgeous and also kind-hearted. He offers the girls shelter and does much more to help them. Tess is of course drawn to him and on occasion she feels his affection for her. Tess is frightened because she keeps hearing voices telling her to go North and she feels compelled to go but not before she makes things right with her friends.


Dragonswood is full of the mystical yet still a wondrous historical novel. I grew to love each character as they were so well defined; each with a distinctive personality and voice. The world building was spectacular; I could picture myself traveling through Dragonswood and beyond in all its fantastic glory. Told in Tess’s perspective, I never felt like I didn’t know what the other girls where thinking yet the mysteries and sub-plots were excellent and surprising. An amazing and captivating book that gets a One-Sit-Read from me, I’ll definitely read it again and I will recommend this book to everyone I know. It's a gem and I want everyone to experience it!


THE FAERY SAYS MY WINGS CARRIED ME FAR FAR AWAY!

Thank you to ATWT and the publisher for allowing me to review this ARC in exchange for my honest opinion.

Posted by Kristi The Book Faery at Monday, December 05, 2011