I am an absolute huge fan of Jennifer L. Armentrout and her spectacular Covenant Series! published by Spencer Hill Press. Alexandria Andros, the Hip Rockin' Kick Butt Heroinne from the series just won against Nora from the Hush, Hush series in the epic Heroinne Tourney held by the YA-Sisterhood.

Pure isn't due out until April of 2012 but I was fortunate enough to get an ARC which I quickly devoured! I will be posting my review on February 1, 2012!


Now.....Drum Roll..... What you've been waiting for! The cover of the fourth book in The Covenant Series: DEITY 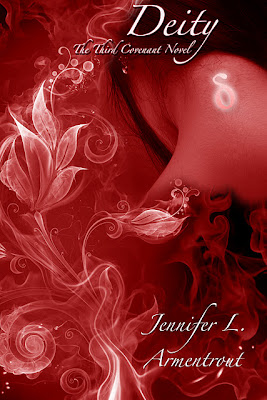 I CANNOT wait to get my hands on this book! All of Jennifer's Covenant Series have been One-Sit-Reads for me and I firmly believe that DEITY will be, too!﻿
If you haven't read them, The Faery says-DO!
Posted by Kristi The Book Faery at Tuesday, December 13, 2011