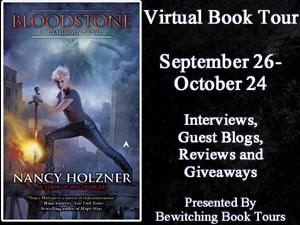 Nancy Holzner is here at The Book Faery today to give an amazing Guest Blog and to promote the third book in THE DEADTOWN SERIES: BLOODSTONE! PLUS one lucky person will win one of THE DEADTOWN books of their choice, autographed by Nancy! The choices are DEADTOWN, HELLFORGED AND BLOODSTONE. Remember, these are AUTOGRAPHED!

Boston’s diverse South End is known for its architecture and great restaurants, not its body count. So when mutilated human corpses begin turning up in the area, the entire city takes notice. The killer—dubbed the South End Reaper—uses a curved blade for his grisly work. And even though there’s no real evidence pointing to a paranormal culprit, the deaths are straining the already-tense relations between Boston’s human and inhuman residents.


As the bodies pile up, Vicky, her formidable aunt Mab, and her werewolf boyfriend Kane investigate, only to find that the creature behind the carnage is after something much more than blood…

Is that a BEAUTEOUS Cover or what! Victory Vaugn not only looks like a gorgeous badass chick, she is one! The Deadtown series is by far, one of my favorite series! It has non-stop action, thrills and chills along with Witches, Demons, ZOMBIES, Werewolves etc... and let us not forget-more than one hunka' burnin' love! I bet my Faery Wings that y'all will LOVE this series!


Nancy, thank you so much for stopping by The Book Faery to talk to us about how you started writing!


How Did You Know You're a Writer?


Not long ago I was speaking to some college writing classes about (what else?) writing. One student asked a question that has stuck with me: “How did you know you were a writer?” Something about the way she phrased her question—or maybe it was the look on her face or the tone of her voice—made me realize she was asking something entirely different, that she was asking how she could find out whether she might be a writer.


People who want to write sometimes feel that they need outside validation, that someone has to give them permission, before they can begin. No one asks dentists, “How did you know you were a dentist?” Same thing goes for accountants, engineers, librarians, and zookeepers. We might ask, “Why did you choose that job?” but we assume that a combination of interest, training, and experience is what led them to where they are now.


Interest, training, and experience. It’s really no different for writers. But for someone hoping to become a writer, it can feel different. It can feel like you need some kind of sign to give you the green light to go ahead and write. Writing feels like a risky activity unless you somehow already know you’re a writer.


So how do you know?


I’ve heard other writers answer this question by saying that they can’t not write. Writing is a compulsion that won’t leave them alone. I understand what they mean, but that’s not my story.


I’ve always been a reader. My mom tells me that I was picking words out of newspaper ads by the time I was three. Because I loved to read, it didn’t take long for me to try my hand at writing. I was enchanted by stories and wanted to create my own. Throughout my childhood and adolescence, I wrote frequently—poems, stories, plays, thoughts. In college, though, my focus changed. I started thinking about careers. I switched from English major to pre-med and then back to English. I worked at sharpening my analytical and critical writing skills as I thought about becoming an academic.


I gave up writing for pleasure. I gave up creative writing entirely.


When I say I gave it up, I mean for years. I got married, had a daughter, went to graduate school. I earned my PhD in English and got an assistant professorship. Later, I derailed myself from the tenure track and found other work: teacher, college admissions counselor, copyeditor, corporate trainer—although much of that work revolved around writing, none of it was writing.


I’d still get nudges to create stories. But I was really good ignoring them, burying them under a mountain of other things to do. There were always papers to grade, clothes to wash, meetings to attend, dinners to make. I could “not write.” And I did “not write.” During this time, the last thing I would have called myself was a writer. I was a mom, a wife, an academic, a teacher, an editor. But I didn’t know that I was a writer. I thought perhaps I wasn’t.


During those years, I’d catch myself creating scenes in my head. I never wrote them down. But I’d make mental sketches of moments from my day: taking the dog for a walk, working on a craft project with my daughter, recasting a lunchtime conversation with a colleague. Eventually, the scenes stretched into stories, which I’d plot out (still just in my head). The stories started to interest me, and eventually I began to pay attention to the nudges and started trying to figure out how to write them down.


For me, the nudges alone weren’t enough. I had to make a conscious choice to write. Writing takes patience, persistence, and work. A lot of work. Choosing to write means choosing all of that, even in the face of rejection, criticism, and indifference. Because if you choose writing, you choose those things, too. But I became a writer when I made that choice.


And I think that’s the answer to that student’s question, the one she stated and the one she was really asking. When I kept coming back to the page, day after day, to tell the stories I felt increasingly compelled to tell, that’s when I knew I was a writer. Now, I might say that I can’t not write. But it hasn’t always been that way. I had to work to get here. Writers write. If you want to know whether you’re a writer, that’s what you need to do. It’s that simple. And that complicated.


Bloodstone, the third novel in Nancy Holzner's Deadtown series, is now available. Besides urban fantasy, Nancy also writes mystery; the first book in her Bo Forrester mystery series is titled Peace, Love, and Murder. For information on Nancy and her books, visit her website. You can also find Nancy on Facebook and Twitter, and blogging with other fantasy authors at Dark Central Station.

To win a signed copy of your choice of an Autographed Book by Nancy Holzner, you don't have to be a Book Faery follower but it would be appreciated!
Fill out the form below:
Giveaway Form
Make sure to visit Bewitching Blog Tours who hosts these lovely blog tours! 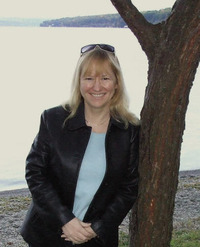 Nancy Holzner grew up in western Massachusetts with her nose stuck in a book. This meant that she tended to walk into things, wore glasses before she was out of elementary school, and forced her parents to institute a “no reading at the dinner table” rule. It was probably inevitable that she majored in English in college and then, because there were still a lot of books she wanted to read, continued her studies long enough to earn a masters degree and a PhD.


She began her career as a medievalist, then jumped off the tenure track to try some other things. Besides teaching English and philosophy, she’s worked as a technical writer, freelance editor and instructional designer, college admissions counselor, and corporate trainer. Most of her nonfiction books are published under the name Nancy Conner.


Nancy lives in upstate New York with her husband Steve, where they both work from home without getting on each other’s nerves. She enjoys visiting local wineries and listening obsessively to opera. There are still a lot of books she wants to read.

Posted by Kristi The Book Faery at Wednesday, October 05, 2011