THE GIRL in the STEEL CORSET by KADY CROSS 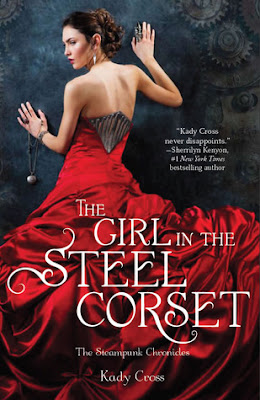 In 1897 England, sixteen-year-old Finley Jayne has no one…except the "thing" inside her.

When a young lord tries to take advantage of Finley, she fights back. And wins. But no normal Victorian girl has a darker side that makes her capable of knocking out a full-grown man with one punch….

Only Griffin King sees the magical darkness inside her that says she's special, says she's one of them. The orphaned duke takes her in from the gaslit streets against the wishes of his band of misfits: Emily, who has her own special abilities and an unrequited love for Sam, who is part robot; and Jasper, an American cowboy with a shadowy secret.

Griffin's investigating a criminal called The Machinist, the mastermind behind several recent crimes by automatons. Finley thinks she can help—and finally be a part of something, finally fit in.

But The Machinist wants to tear Griff's little company of strays apart, and it isn't long before trust is tested on all sides. At least Finley knows whose side she's on—even if it seems no one believes her. Synopsis courtesy of Goodreads.

OH HOW I LOVED THIS BOOK!
﻿

THE FAERY’S VIEW
I LOVED The Girl in the Steel Corset---Everything about it! Kady Cross created an amazing world; Victorian London with a Steam-punky edge that was incredible in its detail I wanted to be there to experience it for myself but Ms. Cross’s vivid descriptions were the next best thing. Moving on to vivid descriptions, Ms. Cross’s character descriptions quickly had me entrenched in the story. Finley, already a favorite heroine from the novella, The Strange Case of Finley Jayne, became even more realistic to me. Her friends became my friends and in turn, her enemies became my enemies!
This book is a One-Sit-Read, the highest honor that this reviewer can give.


Finley, at odds with her two selves; the bad or the other Finley who rejoices in vengence and violence-to those who justly deserve it, of course, that part of Finley seems to only come out when someone is being harmed, abused or threatened and the good Finley, the lady her mother brought her up to be. Finley has always known there is something different about her, she’s incredibly fast, incredibly strong and can do things that no human should be able to do. She heals incredibly fast and can take incredible injury that would kill others. Finley has no idea who her real father is and her mother won’t speak much about him and when she does, Finley senses some untruth lying just underneath her mother’s statements. Will she ever find out who her father is and if so, is he like her?


Finley’s been sacked from her last two positions for defending those that couldn’t defend themselves, she gets another position in a very wealthy family’s Manse. Fearing she’s killed the rascal son who rapes the maids after punching him quite soundly in the mouth when he gets rough with her, the other Finley takes over and runs like a wild thing. It’s while her 'other' self is running blindly that she runs into the Griffin, The Duke of Greythorne, literally, while he’s riding his steam-powered velocycle. He decides to take her home to Greythorne knowing that she’s different immediately. Griffin’s learned to trust his instincts and he’s sure he’s right about this girl lying unconscious with only a cut on her cheek when she should have multiple injuries.


After the shock of waking up in the most luxurious room Finley’s ever seen and then the shock of being in the home of THE Duke of Greythorne, she meets Griffins rag-tag group of friends, all of whom are exceedingly loyal to Griff. Finley feels at once very at home but also an outsider. There’s Emily, with ropey red hair and the smartest person that Finley’s ever met-she’s extremely kind to Finley, then there is Sam, a monster of a man who is part robot who seems angry all the time, many of his barbs directed at Emily and Griff and he makes his distrust of Finley known as often as possible, Griff’s Aunt Cordelia who is his Guardian until he reaches the age of 21, though she is only 10 years or so older then he is but there is a deep affection between the two. Cordelia is a gifted mind reader which comes in handy at times, later we meet Jasper, an American six-gun shooter cowboy who can shoot like nobody’s business. Everyone she meets has something that makes them ‘unusual’. Finley fits right in and she needs to earn the trust of her new friends, friends that know about her two selves and unusual abilities yet still haven’t thrown her out. Ms. Cross did such an amazing job with her characters-they’re vivid, vulnerable and step off the page realistic.


The heart of the story is to catch the notorious Machinist, the criminal who has sent automatons to attack people. Diggers that help dig tunnels is one of the creations he adjusted and the one that almost took Sam’s life. When there is a robbery at The British Museum and it appears it was an automaton that did it, the group can only assume that the Machinist is up to no good. Some of the Queens personal items start disappearing and it’s only a few weeks before The Jubilee Celebration. The Queen makes a Jubilee procession through all of London during that time and Griffin and gang feel her life could be in great danger along with all those that attend. Will they have enough time to stop the Machinist and his mad plans? Is that his plan? You’ll have to read this fascinating story yourself to find out and I highly recommend you do.

I can't tell you enough how much I enjoyed this book! Obviously the length of my review is one sign :o] but I never thought I'd enjoy steam-punk this much but I loved the way Kady Cross used Victorian London, added steam-punk technology, and a great combination of Paranormal Romance and Urban Fantasy. Kady Cross is one author to watch!
Posted by Kristi The Book Faery at Monday, May 23, 2011

Email ThisBlogThis!Share to TwitterShare to FacebookShare to Pinterest
Labels: Harlequin, Kady Cross, Netgalley, One-Sit-Read, Steam-punk, The Girl in the Steel Corset, YA Parnormal romance, YA PNR, YA Urban Fantasy