Review of IILLUSIONS by APRILYNNE PIKE 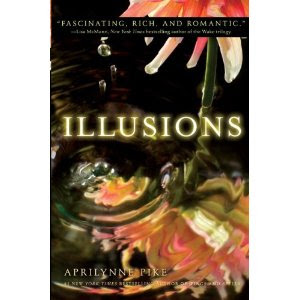 From Goodreads:
Laurel hasn't seen Tamani since she begged him to let her go last year. Though her heart still aches, Laurel is confident that David was the right choice.
But just as life is returning to normal, Laurel discovers that a hidden enemy lies in wait. Once again, Laurel must turn to Tamani to protect and guide her, for the danger that now threatens Avalon is one that no faerie thought would ever be possible. And for the first time, Laurel cannot be sure that her side will prevail.

Illusions is the third book in the Laurel Series by Aprilynne Pike, one of my favorite series as I love all things FAE. Wings and Spells being the first two books in the series that caught my imagination and adoration; thus turning me into a serious Laurel Series Fan & Follower! Illusions did not disappoint. It has all the elements of the first two in the series that I fell in love with plus more! It was a thrill packed ride with mystery, adventure, danger and of course it involved The Fae!
Things are blissfully normal for Laurel-for a while-She returns from her summer training in Avalon with two glorious weeks of summer left to spend with her boyfriend David and friends Chelsea and Ryan. They are finally seniors in High School and looking forward to enjoying a stress-free year! Yeah, right, like that’s going to happen! On the first day of school as Laurel is happily ensconced in David’s arms, Laurel notices a very familiar face with a sexy Scottish brogue among the foreign exchange students; with a wink and a smile he lets her know he sees her, too, she also notices a lovely Asian girl with light green eyes---Hmmmm…

As school carries on, it’s all Laurel can do to keep the peace between the men that adore her-and her own chaotic feelings for the two of them. Not to mention that Klea is back in the picture and has asked that Laurel look out for another student that entered as a foreign exchange student along with Tam. But Laurel has much bigger things to worry about; thinking they were safe from the trolls after many months of non-troll activity, now there are signs of Trolls everywhere. But they disappear as suddenly as they appear, leaving a cold trail every time. Is this a potential threat to Avalon?

Are Laurel and her family and friends safe? It’s up to Laurel, Tamani and crew to follow the bread crumbs and see where it leads them. You know where the bread crumbs lead Hansel & Gretel-not to a good place, that's for certain!


I really enjoyed Illusions I loved the fact that it introduced us to another side of Avalon. I am hopeful the next book will explore this area more as the cliff hanger left me hanging by my fingertips! One thing, though, I was a bit disappointed in Laurel’s character; in fact, I felt she acted more immature than in the previous two books of the series. Thankfully, she rallied around and redeemed my opinion of her again. That being said, Ms. Pike wrote an enthralling and captivating paranormal romance that has all the fixings-mystery, danger and thrills. I cannot wait to read the next installment of The Laurel Series!

One a more personal note: First off I'd like to say if you haven't read THE LAUREL SERIES, read it! WINGS & SPELLS is where it all starts!When I first picked up WINGS, I was amazed at the unique twist in the Fae genre. Ms. Pike gave me a taste of something just a bit different than the normal Fae books I've read, and trust me, I've read a lot! At the end of the book I couldn't wait to read SPELLS and luckily I didn't have to wait long-as some of you know I can be a tad impatient and absolutely DETEST waiting for books, but hey, who doesn't?

SPELLS was even better with Laurel finding some peace with her heritage and taking pride in being a 'mixer' and working hard in Avalon to become the best 'mixer' she could be. Ms. Pike described a beautiful but unusual 'Fae Land' in Avalon, not really unlike those of other books that I've read but I didn't see any of the Seelie/Unseelie Fae wars we so often see in many Fae books.

ILLUSIONS gave me some hope that the next book just might, and this is a big leap but maybe we'll see a much darker side of Avalon that Laurel, and in turn, the reader, was unaware of. I say, WOOT WOOT, to this! I gues we shall see!