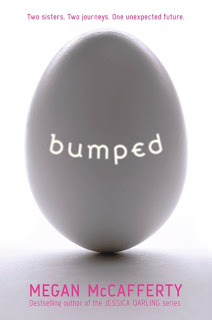 
My first thought on Bumped was what are they talking about? Some of it I understood and some of it was like a foreign language to me! I understood the underlying premise of the story and it didn’t take me long to catch on to some of the slang and soon found it quite hilarious at times. I was expecting a darker dystopian world where the government forced young girls to become pregnant against their will but what I found was quite different. In fact, it was a refreshing change from the dark depressing worlds of most dystopian novels.

The story, told in tandem by Melody and Harmony, two twin sisters, who were given up at birth are reunited at age 16. They’ve both led extremely different lives. The world they live in is one in which a virus attacks women around the age of 18 or older making them sterile. They bid for the most genetically appealing young girl and make a contract with her to carry a baby with another genetically perfect man. The girl then is expected to “do the deed, born to breed” (pg. 10) at a very young age. This is compounded in their head. To be perfect in everything is what Melody strives at and she succeeds. She is beautiful, extremely intelligent, athletic and most importantly, doesn’t have the dreaded virus. Harmony on the other hand grew up quite differently; believing in the sanctity of arranged marriage and has lived in a Christian like compound that has had the opposite message but just as powerful. Believing that she should be engaged by 13 and married shortly afterwards, keeping her children as opposed to selling them to the highest bidder.

Ms. McCafferty did such a spectacular job with this story, where it was often light hearted and sometimes downright hilarious the underlying tragedy and consequences were always there just under the surface. I absolutely love the characters, even the snarky jerk that I won’t name. I quickly became invested in them, both the main and the secondary. It took me a while to like Melody but she did grow on me as she developed a voice throughout the book. The unique world building wasn’t understandable at first but the characters actually walked me through it and that was the fun part!

Bumped was fantastic, thought provoking and fun. The ending leads me to believe a sequel is on its way and this reader will welcome it with open arms! I would highly recommend this book!
Posted by Kristi The Book Faery at Thursday, March 24, 2011